2022 Athlete, Coach, Athlete Volunteer and Volunteer of the Year Were Recognized at Special Luncheon

Four tremendous contributors to Special Olympics Kentucky were honored at a special luncheon to present our 2022 awards on January 19 at our state office in Frankfort. Caitlin Roy of Finchville was named the 2022 Athlete of the Year. Swimming coach Debbie Ogden of Ft. Wright was honored as our Coach of the Year. Nicholasville athlete received the first Athlete Volunteer of the Year Award our organization has ever presented. And Brian Parsley of Prospect was recognized as our 2022 Volunteer of the Year. 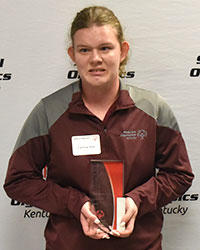 Roy, 25, has been a Special Olympics athlete for 17 years competing in basketball, flag football, softball, bowling and track and field. She is a graduate of the SOKY Athlete Leadership Program.

Her exceptional 2022 included one of the program’s best stories of the year at the 2022 Special Olympics USA Games in June in Orlando. Roy was the only member of the Team Kentucky Track and Field delegation who had previous USA Games experience, having competed at the Games in Seattle in 2018. She served as a team leader both during the buildup to the 2022 Games and throughout the event. On the track, one of the events she chose to compete in was the 400-meter dash, the only one of her three events that she didn’t medal in four years before in Seattle, with the goal of earning a medal this time around. In her 400-meter final, Roy came into the front stretch in fifth place, but made up three places in the final 40 meters to claim the silver. She also ran the second leg of Team Kentucky’s gold-medal winning 4×100 meter relay, giving Kentucky a lead that they would not relinquish.

Away from the track, Roy helped lead her Shelby County Stars softball team to the State Championship in their division, the first ever team championship for that Shelby County program. She also maintained her commitment to her Athlete Leader responsibilities, serving as an ambassador for the program at several events throughout the year. She also participates in the Louisville Polar Plunge, raising money to help support her local program. 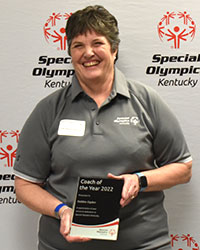 Ogden began her Special Olympics coaching career in 2007 and in her 16 years with the program has focused exclusively on swimming. On the local level, she continues to lead the largest swimming delegation in the state. Her Northern Kentucky Dolphins program boasts nearly 100 swimmers, many of whom have gone on to compete at the USA and World Games levels. She has also used her Dolphins program to help train future coaches.

As the head swimming coach for Team Kentucky, she held weekly practices for her athletes, who came from as far away as Louisville and Lexington to participate. The extra work showed at the 2022 USA Games in June in Orlando, where Kentucky swimmers won six medals, including two individual gold medals, and a team gold in the 4×50-meter medley relay.

Following the USA Games, she was named the head swimming coach for the Special Olympics USA team that will compete at the 2023 World Summer Games in Berlin, Germany, her first World Games experience.

Beyond her coaching duties, she has provided vital support to SOKY staff, serving on the sport development committee for swimming and helping to teach new staff how to use the swim meet software and ensuring that meets run smoothly.

Away from the pool, she is an annual participant in the Greater Cincinnati Polar Plunge, raising more than $3,000 a year at the event. 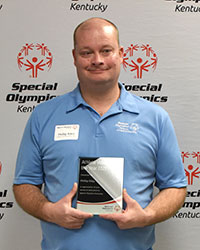 An athlete for 25 years, Riley had the honor of representing the country as part of the Special Olympics USA team as an equestrian athlete at the 2003 World Summer Games in Dublin, Ireland, where he earned a silver medal and a 4th place ribbon. He also dominated the gymnastics competition at the first-ever Special Olympics USA Games held in 2006 in Ames, Iowa, winning six gold medals and one silver in his seven events.

He continued to compete in equestrian, gymnastics and cheerleading for many years and also participated in flag football. He recently returned to equestrian competition after a long absence, claiming two gold medals at the 2022 State Equestrian Competition.

Riley began volunteering, both at the office and at Special Olympics Kentucky events, when he wasn’t competing more than 10 years ago and has become truly indispensable to the program. He regularly makes the trip from Nicholasville to the state office to help out with office needs.  When he wasn’t competing in the equestrian event, he took great pride in helping with the competition’s operations. And he is a key volunteer at the Special Olympics Kentucky State Summer Games, traveling with the staff to Richmond and working every day during the setup, operations and teardown of the Games. 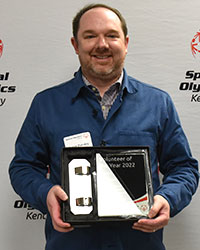 Parsley, who is the husband of Special Olympics Kentucky Director of Unified Champion Schools Karen Michalak-Parsely, has become a leader in the Special Olympics program in his own right, serving the organization in several different capacities. Parsley has played a key role in advancing Special Olympics Kentucky’s popular bocce program. A project manager at Parco Constructors Group, Parsley recruited coworkers and helped build bocce courts for the program at Kentucky Country Day school, and started the Kentucky Country Day Invitational Bocce Tournament. It is the first Special Olympics Kentucky bocce event ever held outside the State Summer Games. He became a coach and Unified Partner for the River City Rumble bocce program. At the 2022 State Summer Games, Parsley took on extra duties at the bocce event with many members of the Special Olympics Kentucky Staff having to leave the event early to accompany Team Kentucky to the 2022 USA Games. He once again recruited volunteers from Parco to help set up the courts for the bocce venue and took over as the venue director once his Unified competition was complete.

He has played a major role in SOKY’s launch of the program’s Esports activities, once again competing as a Unified partner and helping put together the technology needed for SOKY to host its own Esports tournament via the new Special Olympics Kentucky Twitch channel.

Parsley has also offered his talents as a photographer to support the SOKY cause. Nowhere was this on display more than during the USA Games where he was registered as a media member to help make sure all of Team Kentucky’s efforts could be fully represented both on the program’s social media channels and web site as well as in local media reports.