Bringing the World Closer Together Through Sport 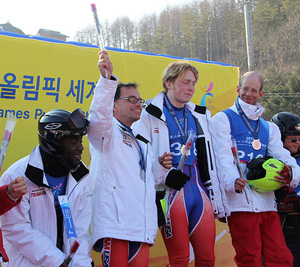 World Games are the highest level of competition for Special Olympics.  There are World Winter Games held every four years and World Summer Games held every 4 years.  Like the Olympics Games, they are on a schedule so that every two years there is a World Games.  Athletes selected for World Games are done so by nomination.  A nomination process generally starts approximately 12-15 months prior to the start of the Games.

After their brief return to the U.S., however, the World Games returned overseas for the 2011 World Summer Games. Those Games were held June 25-July 4, 2011 at the birthplace of the Olympic movement, Athens, Greece. Five Kentucky athletes and two coaches took part in those games, with Kentucky athletes claiming 14 medals.

Two Kentucky athletes — Kelly McCormick and Rickey Oney — competed the 2013 World Winter Games in the South Korean Skiing mecca of Pyeongchang. There is no word as of yet as to how many Kentucky athletes will be participating in those Games. Kelly and Rickey won one medal apiece at the Games.

In 2017, the World Games once again left the USA, when the World Winter Games were contested in Austria for the second time. Many of the ski events will be held in the same venues that hosted the very first World Games outside the USA in 1993. Kelly McCormick was again one of the athletes who represented Kentucky at the Games, where she was joined by Patrick Tutsch of Lexington. McCormick claimed one gold medal in the giant slalom. Tutsch took bronze in the Super G.

A Middle Eastern Country hosted the World Games for the first time in 2019 as Abu Dhabi brought the world together that March. Two Kentucky athletes – Gymnasts Tonya Cornett of Lexington and Lee Dockins of Russellville – were part of the Special Olympics USA team at the Games. Each claimed five medals at the Games with Cornett claiming two silver and three bronze and Dockins bringing home three silvers and a pair of bronze.

Due to issues surrounding the COVID 19 pandemic, the 2021 World Winter Games will actually be held in early 2022 in Khazan, Russia, from January 22-28. More than 2,000 athletes from 108 countries are expected to compete. DesaRae Nickell of Morehead will represent Kentucky at the Games as part of the USA Team.

For more information about the World Games or about how you can support the Kentucky athletes going to the Games, please contact Special Olympics Kentucky President/CEO Trish Mazzoni at 800-633-7403 or via e-mail at tmazzoni@soky.org.