Team Kentucky walked up the concourse at Louisville International Airport on Saturday, July 24, exhausted, but excited to show off the clanging symbols of their hard work and effort at the 2010 Special Olympics USA National Games — the 36 medals and countless ribbons they earned with their tremendous efforts at the Games. 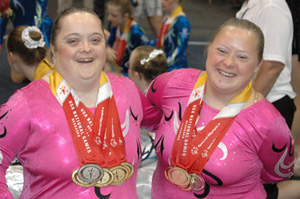 Just as they did at the 2006 National Games in Ames, Iowa, it was the Kentucky gymnasts who led the way in the medal count. Rhythmic gymnasts Kelli Davis of Lexington and Danielle Blakeney of Erlanger combined for 10 medals, including four Gold Medals each at the Games. Davis won Gold in the All-Around, Ball, Hoop and Rope events and Silver in the ribbon. Blakeney also took Gold in the All-Around as well as in the Ball, Clubs and Ribbon. Her Silver Medal came in the Hoop. Davis received the second highest score of any of the Level 1 gymnasts with a 27.587 All-Around mark, while Blakeney finished with the best score in Level 2 regardless of division, earning an All-Around mark of 26.862. (You can see videos of one of each gymnasts performances on our Facebook page atfacebook.com/sokentucky). As a result of her tremendous meet at National Games, Davis was selected to lead the athletes’ oath at the gymnastics exhibition that was held on the last day of the Games.

The Team Kentucky track and field athletes also had an outstanding Games. Tim Kornrumpf, Anne Locke, Ryan Barts and Matt Minning teamed up to win the Gold Medal in the 4×100-meter relay. Barts ran a blistering third leg of the final, giving Minning a huge lead going into the anchor leg. The team came within a second of running its heat in less than 1:00, a tremendous accomplishment at these Games. It was the fifth fastest 4×100 run in all the final heats and it was the best time ever by the Team Kentucky runners. A Taylor Mill resident, Minning added a second Gold to his total, winning his heat of the 3,000-meter run. He added a Silver in the 10,000-meters and a Bronze in the 5,000.

Barts, from Georgetown, came incredibly close to adding two more Gold Medals to the Kentucky count. Barts finished second in both the long jump and the 100-meter dash. In the long jump, he tied for the longest jump in his heat at 5.08 meters and lost on a second jump tiebreaker by just .18 meters (about 6 inches). In the 100-meter dash, Barts lost in a classic, falling just .06 seconds (maybe less than six inches) short of the Gold. In that same 100-meter heat, Louisville’s Tim Kornrumpf claimed the Bronze Medal, just .38 seconds behind Barts. Kornrumpf and Barts also ran in the same 200-meter final, with Barts claiming the Bronze in :26.56, just .4 seconds ahead of Kornrumpf, who finished fourth. Kornrumpf added a 6th place finish in the Shot Put.

Elizabethtown’s Ann Locke only competed in two days of the Games, but was busy on both of them, competing in four preliminaries on one day and four finals on another. In addition to the 4×100-meter Gold, Locke grabbed a Bronze in the 1,500-meter run. She placed fourth in the long jump and fifth in the 800 meters.

Lesley Reising of Berea added a Silver Medal to the Team Kentucky track and field haul. She threw the shot 6.88 meters in her final heat. She also placed 5th in her heat of the 100-meter dash.

Team Kentucky swimmers continually posted personal-best times at a fast pool in the Devaney Sports Complex and while that didn’t always translate into medals, it did translate into a proud coach and some satisfied swimmers. And Kentucky swimmers did claim a passel of medals at the Games, led by Nicholasville’s Collin Lutz. Lutz earned the only Gold of the Games for Team Kentucky aquatics, swimming the 100-yard backstroke in 1:33.99. He had set a personal best in that event in the preliminaries. He added a Bronze Medal in the 100-yard freestyle. Paul Fiehrer of Covington also had a Bronze in his heat of the 100-yard freestyle before adding a Silver in the 200-yard event. Crestwood swimmer Lindsay Davis swam a personal best 1:07.89 in the 50-yard breaststroke to earn a Silver Medal and added a second Silver in the 25-yard event. And Megan McCormick of Lexington earned a Silver Medal in her last race of the Games, swimming a personal-best 1:44.54 in the 100-yard butterfly. She also had a fifth-place finish in the 100-yard free. As a team, the Kentucky swimmers swam a team-best 3:06.36 in the 4×50-yard Medley Relay to place fourth.

Team Kentucky basketball also claimed a Gold Medal at the Games. It was a familiar feeling for the team, which was made up of many of the same players that won Gold at the 2007 World Summer Games in Shanghai, China. Jennifer Hamilton led all scorers in the tournament, and the team got key contributions from every player on the roster as it ended the tournament with a hard-fought 19-16 win over Minnesota. Kentucky ended with a perfect 5-0 record between pool and medal round play.

The final Team Kentucky Gold Medal went to golfer Christy Farwell of Alexandria. Farwell saved her best round of the week for last, firing a 101 at the Highlands Golf Course to hold onto the Gold Medal in her division by four shots. Jeremy Thompson of Lexington and his Unified Partner Kevin Parnell added a Silver Medal in the 9-hole Unified Alternate Shot competition. The pair was incredibly consistent throughout the week, shooting 53-52-53 in their three rounds.

Kentucky bowlers grabbed four medals at the Games. Ashley Brown of Louisville and Sabrina McRath of Owensboro each won a Bronze Medal in the Women’s Singles Competition and then teamed up for another Bronze in the Women’s Pairs. Mark Miller, also of Louisville added another Bronze in Men’s Singles. Miller paired with Stephen Honeycutt of Owensboro, who took a fourth place ribbon in Singles, to earn a fourth place finish in the Men’s Pairs. And the group placed fourth in the Mixed Team event.

Team Kentucky softball ended up in a very tough, not to mention grueling, competition. The Louisville-based team played three games to determine a proper division for the competition and then three pool play games before playing twice in the medal round, so eight games in just five days. They fought hard throughout the event, gaining their first win in the pool play finale against Florida before heading into the medal round. After a first-round loss to Louisiana, Kentucky opened up a lead on a good Florida team, but Florida managed nine unanswered runs in the last two innings and Kentucky finished in fourth place.

“We are so extremely proud of all of our athletes,” said Special Olympics Kentucky Executive Vice President and Team Kentucky Head of Delegation Trish Mazzoni. “Not only in the competition arenas, but everywhere they went, our athletes represented our program and the State of Kentucky with pride, class, dignity and a great spirit of competition and sportsmanship. You could see it everywhere they went.”

Thank you to everyone who supported Team Kentucky through the one-year process between selecting the team and getting our athletes and coaches to the Games. It was a fantastic trip for everyone involved.