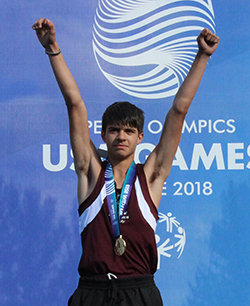 The Special Olympics USA Games got their start in 2006 in in Ames, Iowa, when more than 4,000 athletes converged on the Iowa State University campus for the first multi-sport national Games in USA history.

The 2022 USA Games will be incredibly special as one of the happiest events on Earth will beheld at the Happiest Place on Earth! Special Olympics’ longtime relationship with the Disney Company, the 2022 USA Games will be held June 5-10, 2022, at Walt Disney World with the events taking place primarily at their ESPN Wide World of Sports complex. They are expected to bring together more than 4,000 athletes and 10,000 volunteers.

The Team Kentucky delegation that will compete in the 2022 USA Games was announced on August 31 and will include 56 athletes, Unified partners, coaches and Youth Leadership Experience participants.

The fourth edition of the USA USA Games was held July 1-6, 2018, in beautiful Seattle, Washington. Team Kentucky sent 45 athletes and 18 coaches to the 2018 Games, competing in eight sports – basketball, bocce, bowling, golf, flag football, gymnastics, swimming and track and field. Team Kentucky claimed 50 medals, including 20 gold in Seattle and every member of Team Kentucky claimed at least one medal.

In June 2014, 48 Kentucky athletes were among the 3,500 who traveled to New Jersey to compete in the third Special Olympics USA Games. Kentucky athletes brought home 36 medals, including 18 Gold, as well as numerous other ribbons in track and field, swimming artistic gymnastics, bowling, bocce, golf, basketball and flag football. The medal haul was led by the three Kentucky gymnasts who claimed 15 medals, including 10 Gold on their own.

Kentucky sent 42 athletes to the first Special Olympics USA Games in Iowa. Matt Minning of Taylor Mill became the first gold medalist in USA Games history when he received his medal for the 10,000 meters from Special Olympics, Inc. Chair Tim Shriver. In all, Kentucky athletes claimed 42 medals, including 19 Gold at those Games.

For more information about the Special Olympics USA Games or to find out how you can support Team Kentucky, please contact Special Olympics President and CEO Trish Mazzoni at 800-633-7403 or 502-695-8222 or via e-mail at tmazzoni@soky.org.