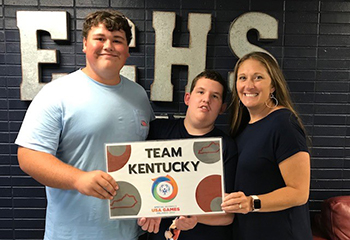 A trio of Unified Champion Schools participants from East Carter High School have been added to the Team Kentucky delegation that will take part in the 2022 Special Olympics USA Games next June in Orlando, Fla. However, the group – which includes athlete Jack Brammell, Unified partner Titus McGlone and mentor Jamie Tiller – won’t be there to compete. Instead they will be participating in the Youth Leadership Experience which happens in conjunction with the Games.

Brammell, 18, is a Grayson resident and a junior at East Carter High School. He has been a part of Unified activities for 3 years.  At East Carter he participates in Unified Club, Unified P.E. and Unified Track & Field. Jack also previously participated in SOKY soccer for a year.  He has traveled all over the world including to Disney with his family and is very excited to be going back.

Jack and his family are working to find him a job in the near future and skills gained during this youth leadership experience will hopefully help him prepare.

McGlone, 17, is also a junior and has been a part of Unified activities for 5 years, having started when he was in middle school.  He participates in Unified Club and Unified P.E.  Due to his friendly demeanor and ability to treat everyone equally, Titus is very popular with students with special needs and regularly engages in Special Education classes as a Peer Mentor.

Tiller has worked at East Carter for six years and started working with Unified programming three years earlier while at East Middle School.  She is a science teacher and the chair person for her department.  Tiller serves as East Carter’s main liaison to the Unified Champion Schools program.  Along with her student leaders, she has helped organize several Youth Leadership Summits in her region to help spread the message of inclusion and inspire other schools to start Unified programs. Jaime has coached Unified Track for her school team and in 2018 she led East Carter to Unified Champion Schools National Banner status, a major achievement that only 3 schools in the entire state have attained.

The group will be fully incorporated into Team Kentucky, including attending Team Training Camp in Richmond in March, travelling to Orlando and staying with the team in team lodging. Once in Orlando, they will participate in a number of activities, including educational opportunities, shadowing Games volunteers and officials and performing a number of volunteer functions themselves.

Brammell, McGlone and Tiller join fellow Carter County athlete Levi Oney on Team Kentucky. Oney is a part of the Team Kentucky Bowling delegation that was announced on August 31.

The Youth Leadership Summit is intended to help develop students and mentors who are better prepared to lead and expand Unified Champion Schools programming in their school when they return home.

The USA Games Youth Leadership Experience is the latest in a line of opportunities for youth pairs to learn and develop in environments surrounding Special Olympics Competitions. In 2014, athlete Tori Cobb and Unified partner Madison Cohoon Murray High School attended the National Youth Summit at the USA Games in New Jersey. in 2017, Cobb and Murray’s Lindsay Wagner were selected to go to Austria for the Global Impact Summit that was held in conjunction with the World Winter Games.

East Carter High School is one of the most active Unified Champion Schools programs in Kentucky. In addition to their National Banner recognition, East Carter decorated one of their locker rooms specifically for the use of its Special Olympics and Unified athletes.