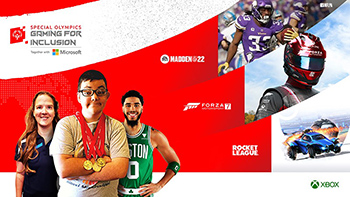 This experience is the next evolution of the award-winning Xbox Virtual Gaming Event hosted in May 2020, when Special Olympics and Microsoft collaborated on a virtual esports tournament to combat the effects of loneliness and isolation brought on by the pandemic. The event won Microsoft the Corporate Community Impact Award at the 2021 Sports Humanitarian Awards presented by ESPN for using its platform and the power of sport to create meaningful social change.

The pair’s matches will all be held on Sept. 12 with the first one starting at 2pm. Matches can be streamed love on the XBox Twitch stream or the Special Olympics YouTube Channel.

The Special Olympics partnership with Microsoft dates back several years, but e-sports took on added importance during the height of the COVID-19 pandemic a year ago.

“COVID-19 and the suspension hundreds of thousands of annual in-person events worldwide meant Special Olympics had to pivot to supporting virtual experiences,” said Special Olympics Chief Information and Technology Officer Prianka Nandy in a release. “Our digital transformation partners at Microsoft brought their expertise in developing scalable and accessible digital platforms that allow people of all abilities to build connections with others through the universal language of gaming. Together, we’ve shaped an innovative program that will last well beyond the pandemic.”