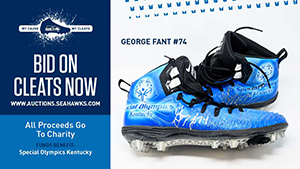 Seattle Seahawks offensive lineman and former WKU Hilltopper George Fant is auctioning off a pair of Special Olympics Kentucky-themed, game-worn cleats with the funds raised to benefit our athletes. Fant, a Bowling Green native, wore the cleats on Sunday, Dec. 2, against the San Francisco 49ers as part of the NFL’s “My Cleats My Cause” promotion, in which every NFL player had the option of choosing a cause and wearing custom-made cleats in support.

Fant’s cleats will be up for auction on the Seahawk’s Web site through 8 pm on Dec. 12.

The cleats, which are autographed by Fant, feature a Special Olympics Kentucky logo and a shoutout to Bowling Green athlete Zach Hudson as “Zach the Mac.”

Fant chose Special Olympics Kentucky because of a lifelong association with people with intellectual disabilities.

“I grew up in a household where my mom always worked with kids who had special needs,” Fant explained prior to the game. “I always had people that lived in my house with special needs my whole life, so it’s always been close to me. I know a lot of people personally who go through it every day and it’s just something I wanted to bring light to.”

Bid on George Fant’s My Cleats My Cause cleats

The cleats aren’t Fant’s first association with Special Olympics Kentucky. He served as an official ambassador for the 2018 Special Olympics USA Games that were held in Seattle in July. He marched into the University of Washington’s Husky Stadium with the Team Kentucky delegation at the Games’ Opening Ceremonies.

Fant, who was recruited to play basketball at Western Kentucky, played only one year of football for the Hilltoppers. After starring for the WKU basketball team, Fant used his fifth year of eligibility to play football for the first time, joining the team as a tight end. He appeared in two games and had one reception, but impressed NFL scouts at WKU’s Pro Day following the season. He joined the Seahawks as an undrafted free agent for the 2016 season and worked his way into the starting lineup for 10 games. Injured in the preseason in 2017, Fant returned for the 2018 season, appearing in all of the Seahawks’ games and starting three through Week 12.

We are truly thankful to Fant for recognizing our athletes in this way. We’re honored that he chose to represent Special Olympics Kentucky during the My Cleats My Cause promotion.