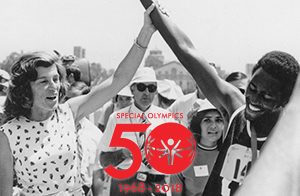 On July 2, 1968, Eunice Kennedy Shriver ushered in a new era for people with intellectual disabilities, when — with 1,000 athletes from three countries — she opened the very first Special Olympics International Games at Soldier Field in Chicago.

In 2018, Special Olympics will celebrate its 50th Anniversary of changing the lives of people with intellectual disabilities. Since those first Games in 1968, Special Olympics has grown to a global movement with more than 5 million athletes in more than 180 countries participating. And while sports will always be at the heart of Special Olympics, it is just a small part of what we now do:

That’s a lot to celebrate, and we want you to share in our excitement. There will be plenty of opportunities to get involved.

The 50th Anniversary will be a focus of all of our events in 2018, but especially our State Summer Games, June 1-3, at Eastern Kentucky University.

July will be a very busy month, as we send 45 athletes and 18 coaches to the 2018 Special Olympics USA Games, July 1-6, in Seattle, Washington. The USA Games will be followed by the Global Special Olympics 50th Anniversary Celebration, July 17-21, in the original home of Special Olympics – Chicago, Illinois. The Global Celebration will include a Unified Soccer Cup from July 17-20, a 50th Anniversary Torch Run and the lighting of an Eternal Flame on the plaza between the Field Museum of Natural History and Soldier Field on July 20, and will close with a Global Day of Inclusion on July 21.

In Kentucky, we will continue the celebration in August with a month-long fundraising campaign that will culminate with a Unified Sports Festival in Louisville (details to come).

For more information about Special Olympics Kentucky’s events for the 50th Anniversary Celebration, contact Trish Mazzoni at 502-695-8222 or tmazzoni@soky.org.