Bowling has become the largest single sport in the Special Olympics Kentucky program. each year more than 1,600 bowlers and Unified partners generally take part in a season that spans from September until the State Bowling Tournament in December. At that event bowlers and spectators usually crowd bowling alleys during a weekend athletes across the state look forward to. This year, obviously, that wasn’t possible; however, hundreds of bowlers still took part in a modified SOKY bowling season.

We opted for a remote bowling model that kept all of the participating teams in their respective communities, practicing – and competing – in their usual bowling centers.

Between the end of September and Oct. 15, bowlers across the state in all of our regular divisions – singles, doubles and Unified – completed a two-game series just as if they were competing at a Regional Tournament, and submitted those scores.

The scores were sorted into divisions just as they would be for a traditional State Bowling Tournament, and between Nov. 15 and Nov. 21 athletes bowled and submitted  two more game scores as their State Tournament scores. Scores were tabulated alongside their counterparts from other parts of the state based on Special Olympics divisioning standards just as they would be at a conventional State Tournament, and medals and awards were sent to their coaches. Virtual State Bowling Tournament 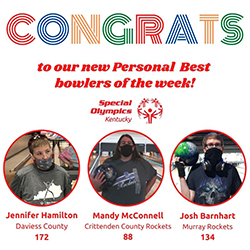 One of the parts of our remote bowling season that was a lot of fun was presenting virtual awards to bowlers who roll a personal best or who join the “Turkey Club” by rolling three strikes in a row. Weekly awards were announced on SOKY social media outlets every Monday afternoon as a way to keep bowlers energized and engaged.

We know that it’s still disappointing that we weren’t able to hold our traditional bowling season and the State Tournament. It is one of the biggest, most exciting weekends of the year. But we hope this remote bowling season has filled some of those gaps and we want our athletes to know how proud we are of them and of the hard work they have continued to do during the 2020 bowling season!