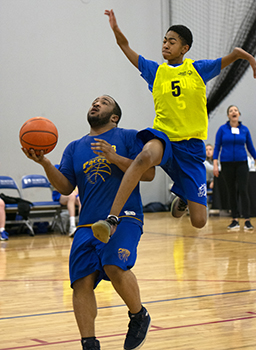 “March Magic,” the Special Olympics Kentucky State Basketball Tournament, will return to MidAmerica Sports Center in Louisville March 11-12. Teams qualified for the State Tournament through a series of Regional Tournaments that were held in February in Benton, Florence and Elizabethtown.

This year’s Tournament will be held on one day. Games get underway at 9 am on Saturday on four courts with the last games beginning at 5 pm.

In all more than 400 athletes will be in action over the weekend with 33 teams in the State Tournament and another eight taking part in the Skills Competition.

State Basketball weekend festivities include a Healthy Athletes opportunity at MidAmerica on Saturday, and the victory dance on Saturday night.

This will be the first official State Basketball Tournament for the program since 2019. The 2020 State Tournament was one of the first event casualties of the pandemic, cancelled just before other events began to shut down. Last year, our basketball season was modified for COVID safety into a practice and drills mode. Teams that travelled to Louisville at the end of the season all participated in a Team Skills Challenge.

Not surprisingly, basketball is the largest team sports offering on the Special Olympics Kentucky calendar each year.

For more information about the State Basketball Tournament or about the Special Olympics Kentucky basketball program, contact Director of Sports and Competition Hunter Brislin at 502-695-8222 or hbrislin@soky.org.