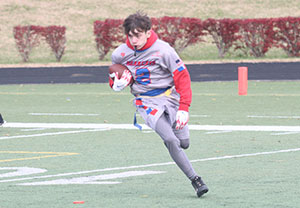 Games will get underway beginning at 9 am.

To qualify for the State Tournament, teams must compete in at least one Regional Tournament, which were held in October.

Flag football is the newest team sport in the Special Olympics Kentucky program. It was first offered in 2010 and was instantly very popular throughout the state. For several years the State Tournament was part of the State Summer Games lineup. The sport moved to the traditional fall season in 2015.