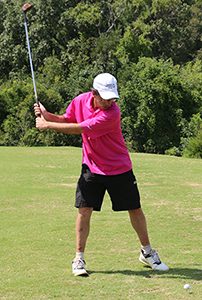 Last year, golf became the only traditional state tournament event that took place after February. This year the State Golf Tournament is part of the resurgence of Special Olympics competition post-pandemic. More than 100 athletes and almost 25 Unified partners are expected to take part when the State Golf Tournament returns to Louisville on Sunday, August 22. This will be the third year that the tournament has been hosted by Quail Chase Golf Club, which many may recognize as the annual host of the Texas Roadhouse Armadillo Classic outing that benefits Special Olympics Kentucky. The Tournament gets underway at 2:50 with an opening ceremony, followed by a shotgun start.

The event provides opportunities for golfers of all skill levels. Beginner golfers and golfers not yet ready for a full round will participate in the Skills Competition, which measures their ability to complete six different common golf shots, with points awarded for accuracy on all shots and for distance on wood and iron shots. Most of the State Tournament’s participants take part in the 9-hole Unified alternate shot competition. The format pairs a Special Olympics golfer with a partner who does not have a disability, and they take turns playing the ball from where their partner last hit it. The most advanced golfers will compete in the 9-hole stroke play event, where Special Olympics golfers will play their own ball throughout.

Golfers qualified by competing in at least one of three regional tournaments in June and July, one in Murray, one in Independence and one in Elizabethtown.

For more information concerning the State Golf Tournament or the Special Olympics Kentucky golf program, contact Nick McKenzie at 800-633-7403 or via e-mail at nmckenzie@soky.org.