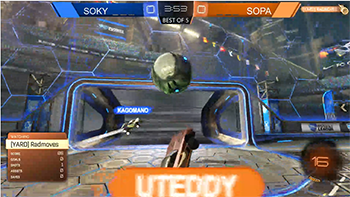 The Supersonic Bracket Champions were Richard Klingensmith and Max Levy of SOPA. The event announcers were SOKY Athlete Ambassador, Hayden Redmon, along with SOKY staffers, Michael Justice and Mark Buerger.

Our second hosted Rocket League Tournament will be held on Thursday, Jan. 26, starting at 7 pm. Once again teams from Kentucky will compete with teams from several other states. You can watch all the action on our Twitch stream.

While Esports can be done in person, the virtual nature of it offers the unique opportunity to compete with athletes from other states.  SOKY has paired with SOILL and SOPA in the past, but in looking to expand with other states, this was the first opportunity to also include SONY and SOAZ.

While expansion to other games is a possibility in the future, thus far, Rocket League has been the main game SOKY has participated in, due to its cross-platform capabilities and free download.  Recently, we have started to also play Fall Guys, following an invite from SOAZ to participate in their Unified Duos tournament.

If you play Rocket League or Fall Guys and are interested in competing in a Unified tournament, please contact Karen kparsley@soky.org or Michael mjustice@soky.org for more information.