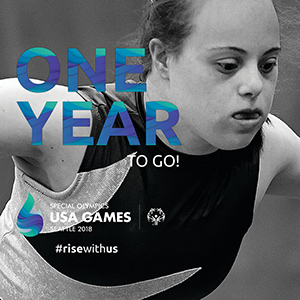 The Team Kentucky delegation that will represent the state at the 2018 Special Olympics USA Games next July in Seattle will be announced live by Special Olympics Kentucky athletes on the organization’s Facebook page at 3 pm on Thursday, July 13. Team Kentucky will be made up of 43 athletes and 17 coaches from all across the state. Kentucky athletes will compete in basketball, bocce, bowling, flag football, golf, gymnastics, swimming and track and field at the Games.

Team Kentucky has always performed well at the USA Games, including a 36-medal performance at the 2014 Games.

The 2018 USA Games will bring together More than 4,000 athletes and coaches representing all 50 states and the District of Columbia, along with the support of tens of thousands of volunteers and spectators, will compete in 14 Olympic-type team and individual sports. The 2018 Special Olympics USA Games will celebrate the Special Olympics movement and its 50th anniversary; promote the ideals of acceptance and inclusion through sport; and showcase athletes from throughout the U.S. and the abilities of people with intellectual disabilities. The 2018 USA Games will also highlight Special Olympics’ work in sport, education, health and community-building.